Hunting historical treasures on the seabed

GeoPluss at Randaberg outside Stavanger is using geophysical methods and technology from the subsea industry to conduct archaeological investigations on the seabed.

The company’s primary market is the offshore and subsea sectors. It offers data processing, quality control and reporting of survey data, primarily through producing terrain models in three-dimensions as well interpretation and analyses of geophysical information.

Since its foundation in 2016, GeoPluss has built up a broad customer base which includes Equinor, Subsea7, Norske Shell, Okea, IKM, Norkyst and DeepOcean.

In addition, the company has specialised in seabed mapping both along the coast and in ports. In recent years, its expertise and experience have also drawn it into the market for marine archaeological investigations.

Collaboration
GeoPluss became involved in 2017 with the Finds in Hafrs Fjord project, which is  searching for solid evidence that the historic naval battle in these waters actually took place as recorded in AD 872.

This gave the company good experience of subsea archaeological mapping, and put it in touch with the Stavanger Maritime Museum – a specialist centre for south-west Norway’s seafaring history.

The two sides exchanged experience about established working methods and equipment in the subsea and surveying sectors, as well as conventional practice in the world of archaeology. It became clear that a collaboration could offer mutual benefits.

That led in turn to a partnership between the museum and private enterprise over the Port of Power project, which is combining archaeology and offshore technology in an innovative and groundbreaking research study.

GeoPluss is now involved in surveying the seabed in the historic port of Avaldsnes north of Stavanger, where sea routes converged and Norwegian kings and chieftains had a presence from the Bronze Age to medieval times. 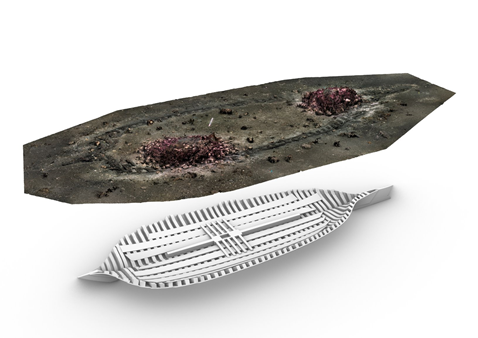 Shipwreck: There are several well-preserved wrecks in the thick and rich cultural layers on the seabed at Avaldsnes. At least one of these wrecks is from the Middle Ages, and there is a good chance that the seabed hides several ships - from Viking times or even older times. Ill: M.Ditta/MUST

She is developing these solutions to gain information about what lies on the seabed, in the upper sedimentary layer and in the intertidal zone in Avaldsnes, which can improve both geological and archaeological knowledge of the area.

Mapping in shallow water is challenging, and equipment to be deployed includes an autonomous surface vehicle (ASV) developed for data collection by the department of energy resources at the University of Stavanger.

MAPPING: When using a multibeam echosounder, a type of sonar that is used to map the seabed, sunken ships can be found off Avaldsnes.

A maritime archaeological survey combining geophysical methods and subsea-industry technology will be the key to understanding why and how Avaldsnes emerged as a power centre, and provide unique insights into daily life in a medieval port.

Investigations in the area can thereby be conducted using non-destructive methods as opposed to the traditional physical excavations, which can disturb and destroy historical relics, structures and cultural layers.

Research results and new exhibits at Avaldsnes will be of great interest to the general public and stimulate cultural tourism in the region.

That makes this a good example of knowledge sharing across sectors, and positions GeoPluss in relation to new and highly interesting projects over coming years.